Warning: count(): Parameter must be an array or an object that implements Countable in /homepages/5/d591958472/htdocs/Lifeinthevertical/blogs/wp-includes/theme.php on line 630
 September 2009 - Life In The Vertical
Skip to content

Well after my run i have been a little slower around the house. In fact I have needed assistance to get up and down stairs today, it was like I inherited the legs of a arthritic 90 year old. Whilst they have eased up somewhat now, I have to say I thought I had done some serious damage. However I have put it down to stretching the ligament in my right knee because I ran on the camber on the right hand side of the road.

The strain seems to have relaxed slight now, so i am back with just really sore muscles, and aches all over my body. What I could do with is a nice massage, unfortunately of the two people I know who do massage both are currently miles away on holiday. So unless I find a young nubile woman in the next few hours then it looks like I will have to live with the aches.

I dread to think just how destroyed my body is going to be after the full 26 miles!

Anyway I am thinking of hitting all my facebook contacts and email contacts for sponsorship over the next few days. I apologise if you get spam! 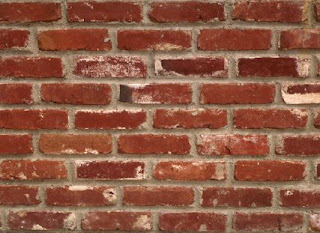 No not the climbing wall but the mythical beast that runners hit when they have expended all their energy, and still have to keep going. Well having had just a small bowl of porridge, coffee and some water for breakfast I managed to hit it after about 2hours 45 minutes on my long run. It wasn’t very pleasant as my whole body started to hurt, and my normal terrible running form turned into what can only be described as special needs running.

Whilst I had to revert to walking rather than running at the top of Cefn Ddu, I wasn’t too disappointed as I ran carrying my energy drinks, jelly babies and extra clothing, not to mention my poor breakfast. I am actually made up as I probably ran about 20 miles and managed it in three and a half hours. Which is looking very good to complete the course in under 5 hours.

My confidence to finish are high and I am looking forward to some shorter runs before the big day.

Well I am gripped. I am about to drive over the pass and park up around the Pen Y Gwryd, and then run the last 20 miles of the Marathon course as my final long run for my training. I can’t pretend that this is going to be easy.

Hopefully I will be back in around 4 hours!!! 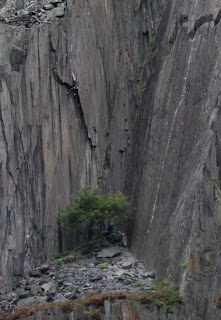 When I was out this afternoon I heard this guy power scream round the roof of Gin Palace F7c next to the dervish. I am pertty sure he managed to redpoint the route. Good Effort, to whoever it was! 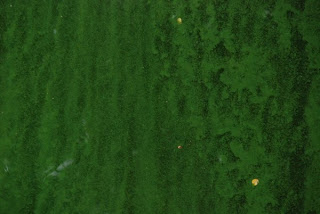 For most of the summer now Llyn Padarn has been infested by Blue Green Algae, a form of plankton that is toxic to humans and dogs. As such it has effected the use of the Llyn for recreational users and outdoor centres alike. The other week we received a letter from the local council informing us of the problem and what we could do to help reduce it.

According to the council it is main down to our washing habits, so despite looking like a smelly village Llanberis is very clean, too clean for the council. In the letter they asked that we minimise our washing, saying that the detergents are helping to fuel the Blue Green Algae Blooms.

My questions is why has all of a sudden the washing habits of the village been responsible for the Algae? This is the first year it has appeared, so what is different? My belief is that it might be the sewage treatment works. There has been all sorts of rumours about mysterious trucks depositing stuff into the system, along with the fact that other water treatment works have failed and resulted in the contamination of drinking water in the North Wales area. SO maybe its not the locals who are suddenly washing their clothes more often, maybe it is something to do with the treatment of our sewage?

Who knows? Anyway, whilst it is crippling the recreational providers who use the lake, in a way it can be beautiful, if toxic to humans and dogs. 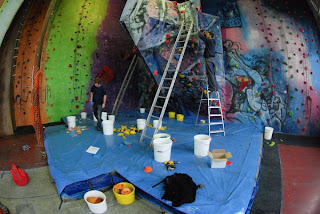 I spent yesterday at the Beacon helping to completely reset the bouldering wall for a kids competition today. Hopefully the competition is going well. Trying to set problems for 7 to 9 year olds is interesting, if a little taxing. I managed to set 8 problems, as well as test most, however I totally ran out of juice and started to fail on red problems due to being totally goosed at the end of the day.

For those that haven’t been to the wall recently then there is some treats in store, not only has the wall seen a major paint job, there has bee loads of new volumes added and moved that simply add loads of variation to the exsisting wall. The beacon now manufactures these volume and they really add something to the flat panels. 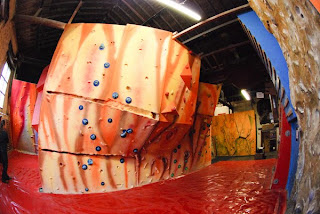 Anyway it was a joy to set again, as it has been a while. The aggregate starts next week, and all the money they raise from selling the score cards for something like £2 (minimum donation) a card goes to the Bolt Fund, so go a long buy a card, may be donate a bit more cash to help the great work that has been going on across North Wales in the rebolting arena. The fund still needs bolts and resin and other sundery things to keep the process going. 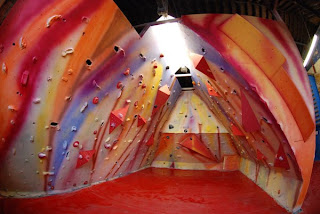 I talked a little about the diamond a couple of posts ago. I have since seen some awesome shots as well as a write up of what has been done by Chris Doyle on his blog. I really advise taking a look at this crag if you have the power and endurance. It looks awesome, thanks go to Pete Harrison for sorting the access out!

I really can’t wait to get there!

Well I saw this on a friends facebook, Nutter!

If you’d like to see more then there is a facebook group, on which is one of the team nailing a backflip!

Well after the final subject in my study, I went to the pub to drink through the relief. Knowing that I have all the data that I now have a month or so to analyze and write up. I ended up getting 28 participants, which is just enough to carry out the analysis that I need to.

Anyway the usual suspects were in the pub, shooting the breeze and chumming as ever. I heard that Pete Harrison has run out of bolts that are suitable to place in the marine areas. Which is a real shame as he was starting to bolt The Diamond on Little Orme. Whilst I have never been there those that have describe it as the best sport climbing venue in the UK.
I guess we have to hope that there is a way that we can find some more bolts for Pete to place, and if you ever see him, give him a pat on the back as he has basically re-equipped LPT and other places around the Orme single handedly.
He should be a climbing hero for all the work he has carried out for North Wales Climbers. It is only through volunteers like Pete that work like this is carried out at all.

Anyway I got up today, and had to deal with my van that currently has no clutch, it doesn’t seem to be the clutch cable, so could well be expense! Arrrgghhhh!

So I went for a run to unwind from the weekend and stress of the van. It was about 7/8 miles and took a little longer than usual as I had to stop and chat to Si Panton who was heading up the quarries to check the sidings area, and then Dave and Miranda who were heading into the quarries for a climb. I then took a new path back down towards llyn padarn, this was a mistake, as my legs look like they have been torn to shreds by a thousand bramble bushes, and they were as the path was unfollowable, so I had to do some bush whacking in shorts (ouch!). Anyway the run was good. Along to Nant Peris, up the zig zags and then back down to llanberis.