Warning: count(): Parameter must be an array or an object that implements Countable in /homepages/5/d591958472/htdocs/Lifeinthevertical/blogs/wp-includes/theme.php on line 630
 September 2009 - Page 3 of 3 - Life In The Vertical
Skip to content 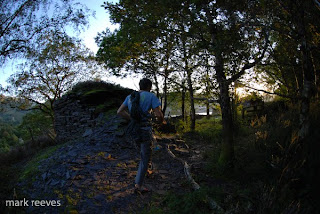 Dave descending from the Dervish after 5 pitches of Sunchaser wall action, as the sun finally disappears over Cefn Ddu. 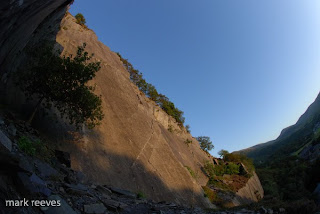 The Shade finally caught up with us when we abseiled off The Dervish. 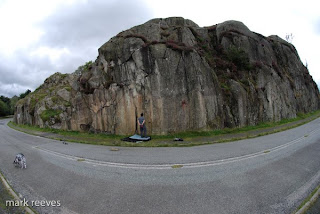 Yellow Wall, a great and local esoteric bouldering area, imagine this was once one of teh main bouldering areas around Llanberis, along with the Pine Tree Boulders. It had been years since I had been there. 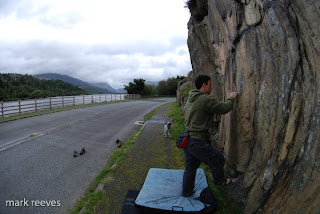 Llion about to attempt another problem on Yellow Wall. 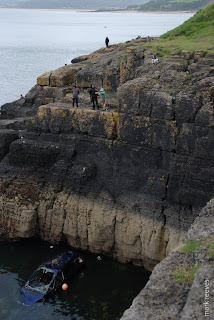 Ford Galaxy Zawn, aka Fishermans Zawn. A new hazard of roicks thrown at the car exsists at the moment. 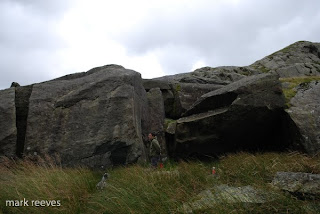 Just about to get rained off Casseg Fraith Boulders, Ogwen Valley

With the good weather finally arriving, probably for one day only, I decided to go for my long run today. I think it was around 14 miles. I headed up Telegraph valley and ran down the bottom of the Snowdon Ranger Path, and then turned right, I was now running the end of the Marathon course, so ran into Waunfawr, and started the gruelling ascent to Cefn Ddu. It is about 3 miles continuous up hill that I will encounter at mile 21 of the Marathon.

Now the clock really seems to be ticking with my training, today I had one of those moments that you see all to often on challenge documentaries, where you see the dawning realisation that I am going to have to run for 5+ hours to complete the marathon. I managed my Half Marathon in 2 hours 20 minutes, so I recon I can get round in just over, but maybe just under 5 hours. Shit, five hours of running!

If that wasn’t enough activity I went to Vivian with Dave this even and ran up the first five pitches of Sunchaser Wall, in the fashion it was first climbed, trying to out climb the rising shade as the sun starts to set. We made really good time to the top of the Dervish but surprisingly I was totally knackered, so we abseilled off. Anyway I hope I sleep well tonight.

I went into Pesda Press today, in order to discuss the layout, design and target for the book. We had a long discussion of the vision for the book, and left it all it Pete’s capable hands. As whilst I wrote the book as a word document there is lots of potential to break the book up into sections to make it more navigable, if that is a word?

We also chatted about the size and layout, it gets pretty exciting to think that over the next few months the book will start to take shape. A benefit to the whole process is that Pete is in the target market or VD to low E grade climbers that the book is aimed at so, he can extract the parts that he find particularly relevent and high light them.

On top of this i also visit my thesis supervisor, and ran the main analysis on my data, and it looks good, whilst there wasn’t a significant effect yet, there was a sign that with some more data, and by eliminating some non adherers we might we find the results we hypothesis. I also have been working on the introduction and methodology sections. So hopefully by the time I get the results I will only have to tweak these slightly when it comes to writing the results and discussion sections.

Anyhow’s I have to get ready to go back up the climbing wall for more data collection.

Got out for a spot of bouldering today, spent the first bit of the afternoon at Casseg Fraith boulders, ticking all the easy routes, although they didn’t feel as easy as they used to. We pretty much ticked the vertical section but was about get on the Classic Arete when the heavens open, i would say i got wet, but I achieve that before I started climbing. I was sat on the booting up block, and looked at the wet boggy ground that lay between me and the crag, and thought I would pad hop across.

So I threw the first pad midway, and made my daring leap, I landed square on the pad, but just as myself relief was about to set in, the dawning realisation that the pad was moving came flooding over me. Fortunately Llion was climbing so was unable to see my leg go horizontal, as I momentarily get airborne again before coming crashing down on my arse, right in the middle of a large very wet bog. He did see how wet I was afterwards though.

We abandoned that ship in favour of the esoteric Yellow Wall, at the end of Llyn Padarn. I haven’t climbed here for ages. It is a place that reminds me of my younger care free days, climbing with amongst other Will. Who knew all the problems, and would regularly school whoever he was climbing with. Although that wasn’t just his knowledge of the routes, as his sheer ability always shine. I missed him today, but I am sure I am not alone in that.

Llion and I managed to climb most of the problems, although the last one was painful. All the brick edge crimping, made me realise that back in the day when this venue was popular the finger strength must have been higher than it is now, well in me it was! Llion almost got the problem, but again the rain came down and we escape back to the village.

What I like about Yellow wall, because it has been so long since I was last there was the fact that i didn’t know any of the problems, so it was great to do a bit of real problem solving, as llion said ‘its easy when you know the sequence!’. Again I have some pictures. I might get a topo or two up for the venues later. I need to eat and have a bath first.

Well UKC very kindly offered a Premiere Post to advertise my Marathon run along with fellow team Llanberis Mountain Rescue Team member Brian. The post has only been up a day and already money has started to flow into the Just Giving Page. I set myself a small goal of beating the amount of money that Bear Grylls managed to raise online by spending a fortune on an Antarctic Expedition (See this post for details).

Bear has managed to raise £280 online, and today I reach £290. So thanks to everyone who has contributed already the money raised will all go to help fund the essential Mountain Rescue work of the Llanberis Team. However, I think as climbers we can all do better than that, and with a couple of months left to go I hope that a few of my reader and followers can dig deep in these financial dire straights and give any amount from £1 upwards. Maybe your company would like to sponsor us.

Either way, I am chuffed to bits to beat Bear Grylls, although I fear that his offline total of £20000 a bit to large to set my sights on. With the Marathon in mind I set out earlier today for a spot of training and ran from Llanberis to Nant Peris where I headed up the zig-zags to Bus Stop Quarry before running towards deinolen where I picked up my van from a little gathering we had last night, which didn’t help the run one bit. I manage to run all the way up though, and now don’t really feel the hour long runs that much.

Although my long runs are starting to take up more and more time, with the average of about one and a half hours, with an increase to about two hours in the next couple of weeks. Thanks to everyone for their support, and just think like that supermarket commercial ‘Every little helps!’