Warning: count(): Parameter must be an array or an object that implements Countable in /homepages/5/d591958472/htdocs/Lifeinthevertical/blogs/wp-includes/theme.php on line 630
 December 2008 - Life In The Vertical
Skip to content 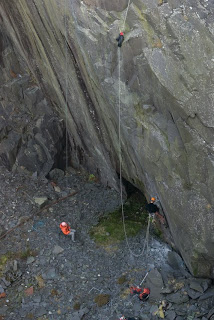 Since the first time I heard of dry tooling, I have had a place in the back of my mind that would be an ideal venue for this much hated sub-sport of climbing. Many see it as sport climbing but with the added evil of chipping holds. However if the growing popularity of things like the Scottish tooling championship is anything to go by then there is interest in this activity. The location that I have had in mind for several years now is amazing, I forgot just how good it is until today when I went back up there to have a look.

A 5 to 10 degree overhanging, and absolutely blank slab of rock. Having heard various suggestion for the venue from chipping an extremely hard sports route up it to placing a series of ‘bolt-on’ holds to make an outdoor climbing wall. The problem is the wall is dark and damp, rarely ever dries, and probably the last time it saw direct sunlight was prior to rock metamorphosing into Slate. I have dropped many hints to people who mix climb or have dry tooled over the years but, no one took the idea on. My thoughts were if I tried to set a route having had no experience of dry tooling the route would be crap. 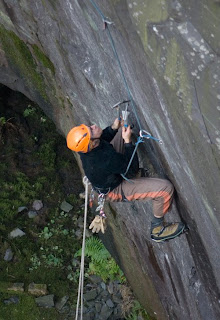 Fortunately two very driven people have decided to have a go, and experiment on the wall, hoping to establish the dinorwic quarries first ever M grade route. Now before people get on there high horses about ethics, I am going to give you all my opinion.
1. This wall is and has been redundant since it was quarried, as such no routes are really being effected.
2. The locals developing this see it as a limited experiment to this one wall at present to see whether Slate makes a suitable medium.
3. Chipping has happen historically in the quarries since the very beginning. Of particular relevance is the wall with Satisfying Frank Bruno on, where Paul Pritchard basically drilled finger pockets!

For any mixed climber who question the validity of dry tooling. Every time I climb a route that winter climbers scratch there way up I can’t help think that if I did that to a route at stanage I would be shot. Whilst many mixed climbers argue that its everyone else who climbs when the route isn’t in condition that damages the rock, I can’t help feeling that they are only trying to fool themselves. As if the route is covered in snow, I often see climbers do there best to scrap it all off to revel the rock. May be dry tooling is the future, maybe we should realise that winter climbing damages the rock that as a climber I love, and set aside routes for the tooled up to trash!

Anyway, before long there will be at least one route, hopefully two or three more in the slate quarries.

Here is a short video about Bouldering in North Wales, I offer it as both taster and spoiler for my later film Amateur Hardcore, which was a full length documentary type film on the highs and lows of the work/climbing dichotomy. I will eventually get round to upload the film in its full length. However I am limited to 500mb upload a month on vimeo and 10 minute video’s on Youtube.

I have also added a followers gadget to the site (its in the side bar). So if you fancy admitting to following this blog, then I would love know who you all are.

Anyway, Have a Happy New Year if I don’t blog before then.

Meglaphobia from mark reeves on Vimeo. 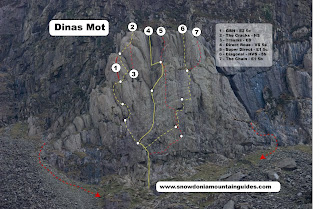 I have to admit that there was no way I could have gotten away with describing Dinas Mot as one of the best crags in the world, However it is a classic venue for rock climbing, although probably not this time of year, as it rarely gets the sun during the summer let alone the winter. However I took a crag shot the other day, and threw together this topo.

Basically Dinas Mot is a great place to venture after a beginner has cut there teeth at multipitch venues like the Idwal Slabs, Milestone Buttress, Tremadog and the Meolwyns. What the Mot offers is a selection of classic HS to E1 routes that are great for breaking that grade barrier and then continuing on. In particular the first route many people do on the crag is The Cracks, a classic HS where the sting in the tail prepares you for the general theme of the crag. 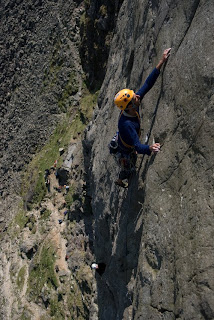 After that then there are few VS’s as good and as clean as Direct Route, a Colin Kirkus classic, with one of the most photogenic pitches in the pass. However the crux pitch is like all on this crag the last, where the slab becomes a steep or even overhanging wall. Similar in style and feel are both diagonal and Super Direct, although its recommended that you finish up the Chain as the finale of Diagonal. Whilst the last pitch of Super Direct is one where you’ll need to attack with a rugged determination. 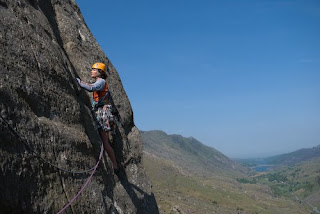 A South African Climber gets to grips with Diagonal during the BMC International Meet.

If the final crack of Super Direct isn’t enough for you then come back round and try the single pitch of GBH, a savage off-hands to hands crack, that despite barely being 30ft in height packs a mean punch.

If you’d like to see any of the other crags or routes I have recommended and provided topos, videos and photos of then I have listed them all below:
Lotus Flower Tower
Rainbow Slab
Old Man of Hoy
Dinas Cromlech
Red Walls, Gogarth
Main Cliff, Gogarth
Yellow Walls, Gogarth
Llawder, Roscolyn, Gogarth
Castell Helen, Gogarth 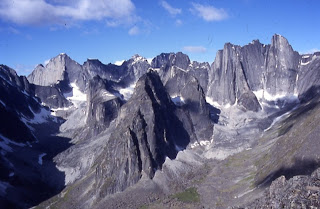 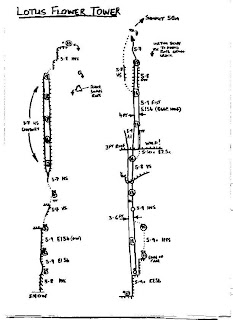 Too many years ago now I went on a course at Plas Y Brenin and saw a lecture by Libby Peters the now owner of Llanberis Guides, that included a section on an expedition she went on to the Cirque of the Unclimbables, this place burnt a lasting impression on me, and in subsequent years I worked towards gaining the experience and confidence to attempt an ascent of this amazing alpine rock route.

My chance came in 2001 when along with Steve Sinfeild I headed out to Canada in search of the most perfect granite free climb on the planet. Weighing in at E2/3 overall, this route features multiple pitches of climbing between VS-E1 with one pitch of E2/3 to make it over a roof on the final steepening slab.

The video tells our story of the climb, as well as a new route we also climbed. The expedition was support by the Welsh Sport Council, Boreal, mammut and DMM. If you like this film or between the rain, and would like to climb any of the routes feature then Mark Reeves can be hired as a guide/instructor through the following website. Alternatively you can visit my coaching blog to help you develop the skills you need to go there yourself.

For more information on the Cirque of the Unlcimbable then visit George Bells excellent website.

The Fast and the Free: Original version from mark reeves on Vimeo. 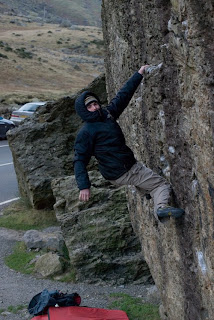 Olly trying to ‘Warm Up!’ at the cromlech boulders.

Well I tried to go bouldering today, up the pass to say that it was cold was an understatement. I didn’t even bother getting my rock boots on. However Olly did for about five minutes before we retreated to the beacon. We should have gone to the rainbow slab as it was baked in sunlight. Instead we retreated to the beacon where the heater must have been jammed on full, rather than the usual set for friction heat!

For those with an eye for winter, Cascade was doing its usual tease of developing a very thing yet unless vaneer of ice, the lack of rain over the last few days might well prevent it forming as thick as we climbers might like! 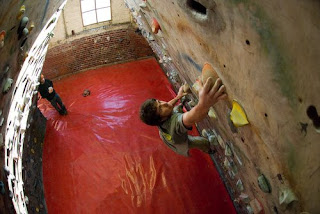 Warm and Cosy at the Beacon 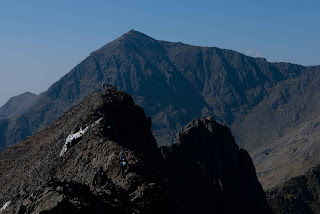 The Knife edge ridge of Crib Coch on a nice summer days, when its still a serious place 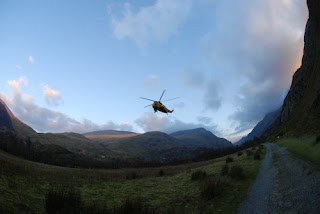 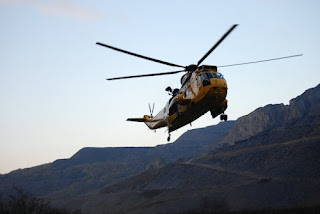 RAF supporting the LLMRT, by saving us a long Christmas Walk. Thank You

Well as many families were tucking into there crimbo dinner, my phone was beebing away, ‘Job No. ….Walkers Cragfast on Crib coch. Team to Nant’. Due to my Christmas Eve I was still sober, as by 2pm when the call out happened I had only just got up, so was still sober.

Many thanks for the T$@*£! that nearly ruined my christmas dinner. You like to think people would think twice before put themselves in danger on Christmas Day considering that the rescue team is made up of volunteers. Although judging by the kit they were wearing the hadn’t thought once before heading up the hill in the middle of winter.

Hi I know there is at least one fan of my brothers comedy songs out there (Hi Dave and Maz, Happy Xmas!) I have posted this Wham Parody he sang on BBC Radio Solent this week.

A selection of images taken today around Llanberis, with my two new lens. The light was pretty dull, but some have turned out OK. 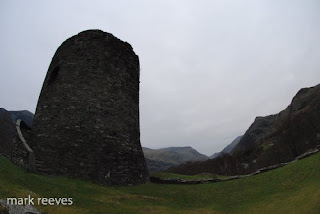 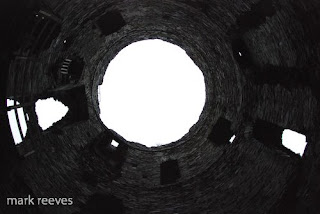 Eye to the Sky 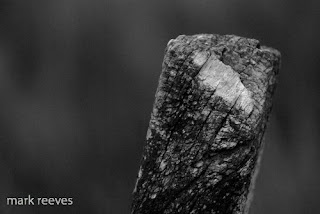 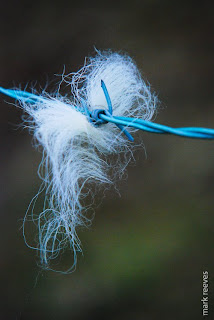 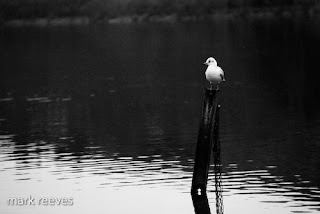 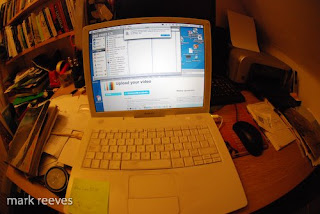 Well I treated myself for christmas, I brought me a fisheye lens for my DSLR and a Zoom lens, not to mention a nice bag to put it all in. I have taken a few photo’s so far, but I’ll leave you with a view of my office, basically a laptop and external hardrive. A typical bedroom dot com.

I first released this film in 2003, it was the first film that I made for the climbing market. I learnt a lot making the film, and looking back at it now I see the nievity of some of it. However it did question the On-sight, Ground Up game well before it became hotly debated on UKC and other mediums.

At present this is perhaps the best way that I can let anyone who never saw it to have a look. It’s not Ideal, but I have looked back through my archive and found several old rushes of films I made, as well as the released versions of Amateur HArdcore and Duty Paid. All these videos were support by DMM and Mammut who supplied me with climbing gear to help make these films.

Between The Rain from mark reeves on Vimeo.