Warning: count(): Parameter must be an array or an object that implements Countable in /homepages/5/d591958472/htdocs/Lifeinthevertical/blogs/wp-includes/theme.php on line 630
 - Life In The Vertical
Skip to content 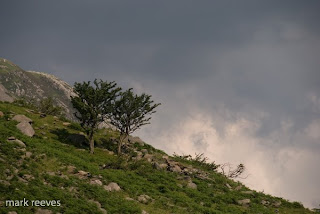 The Pass with Thundery Clouds

I left the village at about 4 pm, to meet Dave and Miranda up at Drws Y Gwynt. I beat them to the car park, and headed up the hill in the scorching heat. I knew right away it was going to be sticky. The crag looked miles up the hillside however the walk in only took ten minutes. The climbing looks butch from below, a series of crack mark the ‘lines’ of the crag.

The easiest a thin hands to hands crack up a corner, Miranda laybacked it after gersumping herself by placing all the cams that fit the crack in the first 10 feet. I was an awesome effort, given that it is graded VS for the jamming, it look a delicate and pumpy layback!
Dave then climbed the classic of the crag Too Hard for Jim Perrin a classic E1, that only gets ** in the latest Pass Guide, but put that route along with Little Sepulchre the VS and the route I then lead A Touch of Class on any Gritstone crag and they would get three stars of anyone’s money!
Too Hard… was stunning a sustain finger to hand crack with the emphasis on hard fingers. I had my tourist boots on, and struggle with the crux until I had to rest briefly, before pedalling like mad and pulling like a loon to reach the next foothold I could get my feet onto.
My lead was ace I haven’t climb a steep E1 that I haven’t climbed before in a long time. The route was intricate and technical, with the odd wild move to get between good holds. It was hot though even at 8pm as the sun was dropping I found myself sweating like I was Murray in this evening gripping Wimbledon match. Which was part due to the the heat, but part due to the fact that i ran out of quickdraws halfway up and had to keep removing gear I had place to get wires in higher.
The even was amazing the wind kept the midges away from the high crag, and even better on the way down I was left a late birthday present from ‘The Blind Watchmaker’ who left me two cams. At least I think it was the blind watchmaker, as in Richard Dawkins‘ book of the same name he suggest that evolution is so amazing as it has built machines so intricate and complicated that should you stumble across Watch in the middle of a bog that it is just as likely that nature put there than a human.
So I propose that when you find gear at a crag it isn’t some unlucky person who forgot it or couldn’t get it out or dropped it, but its the Blind Watchmaker leaving you a present. That’s my belief anyway, if you want your gear back remember I didn’t find it, it was left as a present from its maker! 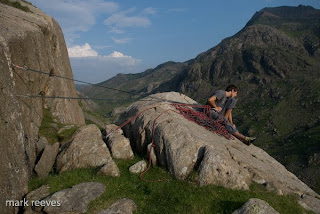 Ropework and views – Dave atop Too Hard for Jim Perrin 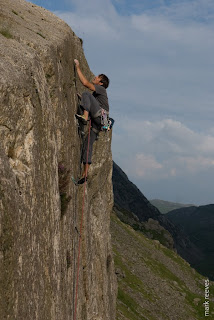 Topping out on Too Hard….

The Dramatic Backdrop to Too Hard… 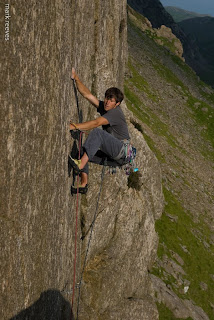 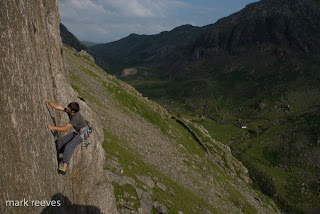 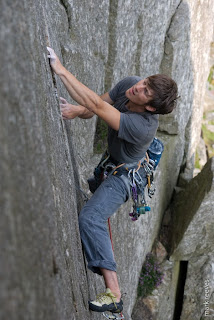 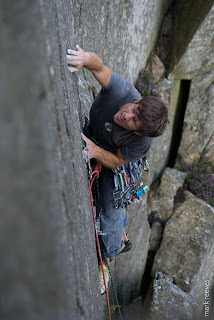 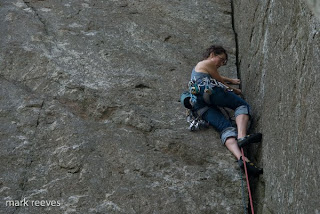