Warning: count(): Parameter must be an array or an object that implements Countable in /homepages/5/d591958472/htdocs/Lifeinthevertical/blogs/wp-includes/theme.php on line 630
 New Lightest Screwgate Karabiner in the World - Life In The Vertical
Skip to content 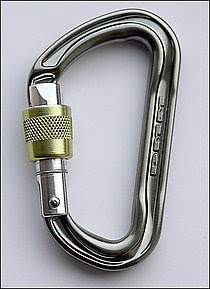 The Phantom Screwgate the Lightest Screwgate Carabiner in the World.

Well a few weeks ago I mentioned the wild country claims at lightest carabiner in the world. However I also mentioned that DMM were about to launch the even lighter than that carabiner. The Phantom Screwgate is an amazing 41 grams, and comes with the usual DMM flare for ergonomic design. As the originators of the I-beam construction technique in carabiners, it is only fitting that the mantel of ‘lightest …. in the world’ comes back into the hands of one of the worlds leading designers and manufacturers of climbing equipment.

I might sound a little in the paid service of DMM, however whilst I have received goods of them in the past, I haven’t done for some time, however as a local to Llanberis I feel a strong bond towards a company that employs so many villagers, they have also helped put a positive spin on Mountaineering long before Snowdonia-Active published their report into the Adventure Tourism Economy in North West Wales.

As such I see DMM as a spearhead of manufacturing achievement, who have manage to sucessfully avoid ‘out sourcing’ manufacturing to the far east. Instead a totally modern factory by the shores of Llyn Peris house the hardware for state of the art hot forging. Whilst DMM have a Premiere post on UKC, I couldn’t find a mention of this amazing feat of engineering on their website (but didn’t look very closely, I also haven’t started Twittering). However its my belief that it will be available in V12 and Joe Browns already (they both take all major credit cards!).

Interestingly DMM have some new products in the form of some brass micro wires based on the old HB offsets, as well as some based on the RP design, as well as some large protection in the form of DMM version of the Hex, have seen these bits of kit they look as versatile if not more than the Rockcentric (I can’t wait to try using them outside), and has a great sling feature that I am sure Wild Country will R&D (rip-off and duplicate) into their own range large passive protection.

If you’d like to see the kind of love, care and attention that is put into the making of all DMM’s beautiful equipment then either look at my video from a few years back or better still Dave Gills more recent offering.

The making of a carabiner @ DMM Wales from Dave Gill on Vimeo.

The Secret Life of Krabs from mark reeves on Vimeo.