Warning: count(): Parameter must be an array or an object that implements Countable in /homepages/5/d591958472/htdocs/Lifeinthevertical/blogs/wp-includes/theme.php on line 630
 Bear Grylls, The BMC and Us - Life In The Vertical
Skip to content

I have known about this story for some time, and have toyed with trying to write something on it for a bigger media outlet than my own blog, as there are parts of the story that as a climber and adventurer I personally find a little bizarre to say the least. I can’t really say where the story came from, I can’t say with 100% accuracy what actually happen. I can share with you through the wonders of hyperlinking where I got my information from, and how I pieced together the story from a throw away comment made at the BMC AGM.

The story starts back at the end of last year, Bear Grylls and his friends (I assume it was he film crew, as he uses the same small team of specialist for his Born Survivor Series) had arranged an expedition to Antarctica there were several ‘aims’ of this expedition some more overt than others. Amongst those objectives was scaling an unclimbed peak, promoting a venture capitalist company specialising in Bio-Ethanol Fuel, and raising £1/2 million for charity. (Most of the information can be found on the expedition website.
Now whilst I would now way criticise an expedition to scale an unclimbed peak, I feel that this was perhaps just a small add on to try and give the expedition some credibility. As Antarctic exploration in my opinion is one of the last great frontiers. However as you will find out as we go on Bears has tried to turn it into little more than an amusement park. After all, when climbers usually go to these places they don’t take a jet ski, an inflatable dinghy and motorised Power gliders. (Again see the mission statement and equipment list they took on the expedition website) 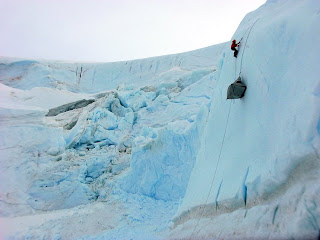 This photo is stolen from the Expedition website. Why are they sleeping in a portaledge, when there ropes go to the top of the cliff. It just strikes me that they were pretending they were being more Extreme than was actually necessary.
One of the biggest things about this expedition was the probably cost, on their website they mention that they went with a company called White Desert who sell themselves as the only company that can take you to the interior of Antarctica in “Luxury and Comfort”. Their cheapest ‘package’ is £23000 per person, based on four people that is instantly near £100000. Given that their expedition probably wasn’t a package, it may well have cost even more than that considering the ‘extra’ equipment they took!
A recent story in the mirror, looked at ‘Celebrity Charity Balls’ that basically spend most of the money raised on the event, so it works out that sometimes only 12% or less of the money raised actually goes to the charity. Given the stated ambition to raise £1/2 million for Global Angels, Bear manage to raise £20000 ‘offline’, but only £280 online. Compare that to the money spent on the expedition and the charitable nature of the expedition becomes a little more questionable.
Now given that Bear’s trip looks like it was funded by Ethanol Ventures, probably due to his ‘celebrity’ status, his programme Born Survivor is as popular across the Atlantic as it is in the UK if not more so. Like any sensible person Bear needed insurance for his expedition, it would appear that he went to the BMC for it, when you read this installment of the expedition diary.
Now this came to light because Bear manage to break his clavicle in a kite-surfing accident, which sounds horrible, but a friend broke his ‘Collar bone’, and all he got was a sling to pull his shoulders back, as there is very little that you can do for such an injury. Bear however was medi-evac from Antarctica back to the UK.
Now given that many people every year need assistance through the BMC travel insurance scheme, it seems a little harsh to single Bear Grylls out. However given that his rescue would have potentially cost 10’s if not £100000’s of pounds, it was potentially a lot more expensive than rescuing someone from Europe or America.
At the BMC AGM the representative from Perkins Slade underwriters of the BMC insurance talked about having to raise the premiums next year, and that the BMC won’t be getting what has become a regular £100000 cheque, from the profit sharing that they have with Perkin Slade. The question is was it Bear’s Grylls rescue that cost the insurance scheme so much that it not only destroyed the profits but also resulted in an increase in its cost?
I also heard a rumour, and it is a rumour that the BMC will no longer insure Bear Grylls, I just hope that he wasn’t covered by BMC insurance when he was subsequently rescued from Vietnam, after he tried to cut his finger off with some bamboo!
I will let you guys draw conclusions from this, but as a climber who has gone on expeditions, it just seemed to me that Bear Grylls’ Expedition has a few to many bells and whistles to be what I consider to be an ‘climbing expedition’. Far better an effort might be Ben Fogles and Ben Cracknells On Thin Ice on BBC, where they are attempting to race to the South Pole, pulling there kit with them.
Anyway my ambition is to raise more money online than he did, when I run the Snowdonia Marathon for the Llanberis Mountain Rescue Team. If you want to help me beat Bear, then please click here or on the donation link in the sidebar.
UPDATE 2012 – Bears Website for the exedition is down, there is a new link to the cached pages in the comments below