Warning: count(): Parameter must be an array or an object that implements Countable in /homepages/5/d591958472/htdocs/Lifeinthevertical/blogs/wp-includes/theme.php on line 630
 My First Fell Race - Life In The Vertical
Skip to content 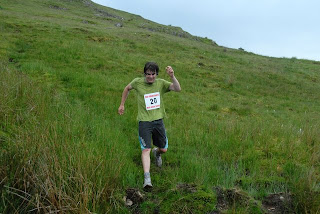 Me Focally Tucked on the descent from Moel Ellio, Photo comes from the Welsh Fell Running Association website, and photographer Alistair Tye

Well after last night pleasant even cragging, my friend Miranda suggested I get involved with a fell race this evening. Now given that I protested a lot about racing saying that I was mainly running to try and get fit for something bigger, I was surprised at myself when I turned up and paid my £1.50. Imagine paying for the biggest beasting of your adult life, an aerobic shoeing of gargantuan proportions.

The race registered at the Heights so my body thought it was just going to get drunk, until it went straight back outside to prepare for the race. I was disappointed to see many familiar faces, most looking at me in shock, as if I had turn up naked. I did check, and yes I had remember to get dress. Looking around everyone was look very athletic, stretching and warming up, I sat on the wall, turn the iPlod on and waited for something to happen, as the skies opened and I realised that my road running shoes were going to be a right laugh on the way down!

Suddenly everyone started running out of the village, up towards the Youth Hostel, shit had I missed the start. No, the start was a kilometre up the track. I thought I would be late as I couldn’t keep up, but instead I just waited around in a midge infested hell hole. It was only after I had the look of someone about to kill himself to end the midge hell that someone from the Great Arete the sponsors of the race offer me some industrial strength DEET, that started to melt my headphones.

Now usually I head out for a run it takes around an hour and then I am done, here I had to watch the under 8’s run up and down a field, fair play they didn’t take very long. Before we then moved again to the actual start of the race. This was the practice that I wanted, having never really raced before I thought it important to practice the ‘mass start’ which was a little more exciting and epic than I thought. I was very aware that as we started to spread I was doing alright, my well I just plod round was right out the window, as I realised that the person in front of me was going to slow, and then the next person.

Now forget pacing, I had to get to the top as quick as possible, as I wasn’t going to set the world alight on the descent. It became an addiction closing down on the people in front, and after a little backwards momentum I found my pace on the final up hill and started to reel in a few more people. I powered up, and it looked like I was about 10th at the summit, but it was probably the fact that the people at the front were so far ahead that they had disappeared out of sight.

It wasn’t long before the people started flowing past me on the descent, I had pipped Miranda to the summit but she destroyed me on the way down. I finished in what I thought was a respectable time, just over 40 minutes. I have to admit that I am not sure about racing as it brings out the competitor in me, a side that I try and repress. I enjoy running and it just seems that it makes it a little bit more of a chore.

As for the social side, maybe I will try a few more of the races, as this was the last of the Tuesday night race series. What was good was that for my £1.50 I got some soup, a roll and some pizza. If I had known that I would have entered and not bothered running. All in all an enjoyable experience apart from waiting in the midge cloud, I will try and do another race or two before the big day just to get used to the whole thing. I think I need to concentrate on running my own race, rather than getting involved in competing.