Warning: count(): Parameter must be an array or an object that implements Countable in /homepages/5/d591958472/htdocs/Lifeinthevertical/blogs/wp-includes/theme.php on line 630
 Crag X, Y and Z - Life In The Vertical
Skip to content 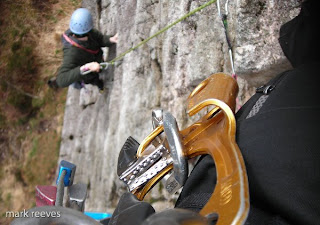 Well I have spent the day teaching four students lead climb at a secret crag in North Wales. I have photos, however I don’t really want to give the name of the crag because for a quality single pitch venue, it was notably devoid of any other climbers or groups. The routes range form VD to HVS with a large collection in the VD/severe range, so its an impeccable crag for people starting out, it is just nice that no one uses it. Looking at the upper tier at tremadog i simply wouldn’t want that to happen to this crag, as when it is busy with groups the upper tier is ridiculous.

It is so out of the way that most of the routes where developed from the 1990’s onwards. The rock has a beautiful gritty texture to the touch, and a series of undulating waves make it a like a miniature version of Altantic slab at the end of the ogwen valley. The the sun even came out. I would say it is possible the best single pitch lead climbing venue in North Wales.

Anyway I worked with a legend among instructors today, whilst I have run into him at crags and other places I haven’t work for him before. That man is Tim Jepson, who has help educate some of the most well qualified teachers of outdoor education in the UK, for many years. Tim has run a Post Graduate Certificate in Outdoor Education at Bangor University for many years, his course turns out around 12 teacher/instructors a year. After I chatted to the other instructor I was working with, it was funny because he said that was where Tim was going to suggest to us take them!

Anyway I am looking forward to next week when I am hoping to go back to this fantastic venue. 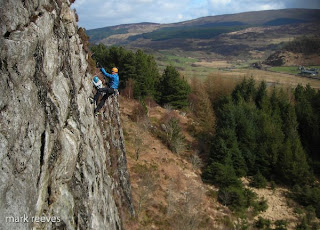