Warning: count(): Parameter must be an array or an object that implements Countable in /homepages/5/d591958472/htdocs/Lifeinthevertical/blogs/wp-includes/theme.php on line 630
 Team Cymru - Life In The Vertical
Skip to content 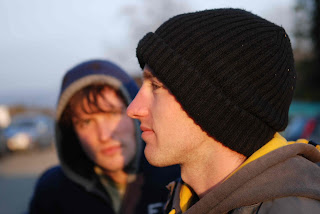 Fading into the background, Pete Robins (out of focus) whilst James McHaffie takes the limelight after climbing Strawberries in 2007.

Whilst we don’t have a terrible large community, for instance the general population of the whole of North Wales is probably less than a large city like Manchester or Sheffield, but what we do have is a small, close and vibrant scene, that still manages to knock out product on a level that meets if not exceeds what the rest of the UK and at time the world manage. This week has been particularly good for North Wales, firstly news on UKC that Floppy has got a Font 8b+ ticked in some obscure European bouldering haunt, along with Nodder who also managed to knock out an 8b.

These guys aren’t cutting edge full timers professional climber, but the type of obsessive amateur that I had the privilege film a few years back and capture there lifestyles at the time in the Amateur Hardcore. Now Dave still works in the same climbing wall, where he trains a fair amount and still gets out on his days off. Whilst Chris currently works for Outlook Expeditions, where he oversees oversea expeditions on a 9 to 5 basis and fore fills his father role to his kids the rest of the day and still manages to get out and knock out Stella lines. Is it the kind of power they are born with or can it be trained? Who knows, my guess is that in between the climbing they’ve probably drank more than there share of alcohol, and had a proper good time! 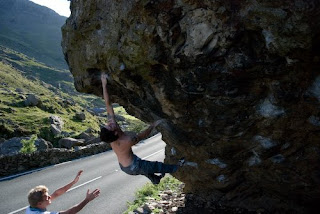 Floppy attempting Pools of Bethesda a while ago now!

If that bouldering news wasn’t enough I was told by his bubbling girlfriend tonight at the wall that Pete Robins has had one of the days of his life on the Grit. Now I have heard of and witnessed Pete’s fitness on Grit and other rock mediums and it is truly inspirational. So to hear that he has had one of the climbing days of his life, really made me wonder what he had done. I knew he was heading over to try a problem he had spied several years ago, but gave up on when he moved to Wales, handing it over to Adam Long, who showed it to James McHaffie who nearly climbed it early this week.

So I wasn’t surprised to hear Pete had made a quick ascent of this, however another hard problem was mentioned that I can’t remember the name of along with an ascent of Renegade Master, no doubt done ground up, and a onsight of End of the Affair. Now I expect that some statement will follow saying that due to have seen a film of someone climbing it Pete is not claiming the true on-sight, but as style goes that is fantastic. 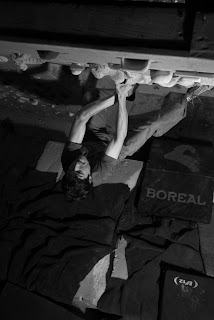 Pete Robins Training at ‘The Mill’

Now Pete isn’t a full time climber either, Dr Robins is a extremely talented mathematician who creates dynamic models of coastal environments to show the effects of global warming. Working four days a week, 9 to 5 in an office, seems to allow him to develop a massive amount of psyche and determination to get out there and climb it. Climbing is in his blood his father is manager of the Edge in Sheffield and Pete cut his teeth on the gritstone edge’s before moving to Wales to attend university where he’s been burning us all off every since.

One of the ‘things’ that seems to be important in Wales is the style you climb a route, to the extent that a couple of days ago in the pub, I mentioned that I wanted to climb a route that was probably too hard for me but I’ll accept a dogged ascent. The route was Conan the Librarian and I expected the likes of Pete and Jack Geldard to have climbed it, hoping for some beta or a offer of pay back from numerous belaying duties for Pete, it turned out that neither of them had climbed it because they all what to try and on-sight the first pitch. So whilst Caff has climbed it three times, the rest of Wales ‘big guns’ and the overambitious me are in a kind of Mexican stand off waiting for someone to back down on climbing the first pitch.

Anyway North Wales is great, as are the climbers who pretty much made Al Lee’s film ‘Onsight’, although I was lucky enough to film a few of those characters in my film from a few years back Between the Rain. When I am sat on my arse typing I often wonder at the community in which I live.