Warning: count(): Parameter must be an array or an object that implements Countable in /homepages/5/d591958472/htdocs/Lifeinthevertical/blogs/wp-includes/theme.php on line 630
 Fifty Classic Climbs of North American - Life In The Vertical
Skip to content 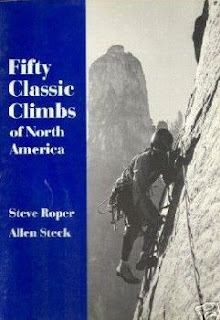 There is an old book that until this year I had heard of and only seen the list of routes it contains, a kind of classic/hard/extreme rock on acid for the North American Continent. I am lucky enough to rent a room in a house where as well as all the above books, there is also a copy of Fifty Classic Climbs of North America.

Now for a while I have realised that this is perhaps the ultimate in tick list for an American let alone a Brit, who lives in Wales. However I have for many years wished to start ticking in a Munroist kind of fashion all the routes in this most select of selective guides. So far I have managed to tick The Lost Arrow Spire, Half Dome regular NW Face, Salathe Wall and The Lotus Flower Tower. I am planning this year in re-visiting this list however as climbing standards have developed and the fashion of ascent have change I am starting to realise that the ‘list’, as historic as it might be is actually very dated in its content.

So rather than concentrate on ticking this guide I am working on deciding on a list of newer modern routes that capture the age and the style of the modern idiom. With a plan of flying into Denver and head west, trying to tick as many classic rock routes as possible. For instance the Black Canyon of Gunnison isn’t in the fifty classic routes, however what route to choose if you are going to only spend a day there before moving on. I have been recommended the Scenic Cruise there, but have no idea of what route to climb at Eldorado Canyon.

Whilst the Titan, the Diamond and Castle rock made it into Roper’s and Steck’s 50 classic climbs, the route choice however, despite being historic, aren’t necessarily the routes you’d do in a day of free climbing! So if you doing a neighbouring harder route would you get the tick?Similarly routes like Epinephrine in Red Rocks don’t make it onto the list because they were not climbed before the guidebook came out.

As such I am in the process of creating the ultimate holiday tick list, which is a great way to get psyched. I just need to save up for the flights now!