Warning: count(): Parameter must be an array or an object that implements Countable in /homepages/5/d591958472/htdocs/Lifeinthevertical/blogs/wp-includes/theme.php on line 630
 Ultra Run for an Ultra Good Cause - Life In The Vertical
Skip to content 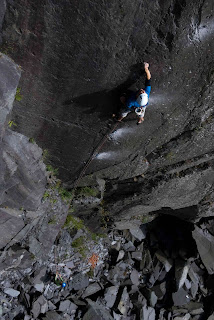 I received an email today from Shane Ohly, about his latest project. Shane has been associated with many crazy capers, several years ago now he complete 500 extreme routes on grit in a day. Which was an amazing effort, one that won’t be repeated that often that’s for sure. For a reasonable amount of time now Shane has been competing in adventure races and long or Ultra distant running challenges. No more so challenge than the infamous Ramsay Round.

Named after the first person to successfully complete the run in 24 hours Charlie Ramsay. The route is 63 miles long and has 30000 feet of ascent and descent, and covers some of the most rugged, remote and challenging terrain Scotland has to offer. Now imagine trying to complete this challenge non-stop in winter conditions, and that’s what Shane is putting himself up against in order to raise some money for cancer research.

His choice of charity lies close to his heart, having recently had his mother taken from him through breast cancer.Having several close friends that have been affected in similar ways by this awful desease, and supporting the charity through the ‘Pink Parties’ at the Gallt Y Glyn, along with many other friends. If you’d like to help support Shane in reaching his goal then you can visit his just giving page here. If you would like to know more about shane challenge than there is an online article about the last time he attempted the challenge.

Photo: Shane on Manimal F6b+, just after it was re-eqipped, vivian quarry