Warning: count(): Parameter must be an array or an object that implements Countable in /homepages/5/d591958472/htdocs/Lifeinthevertical/blogs/wp-includes/theme.php on line 630
 Hollyoaks Later: Rigging Naill's Death - Life In The Vertical
Skip to content 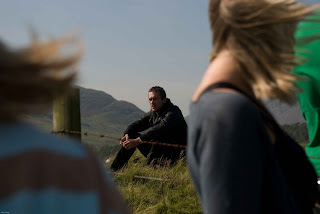 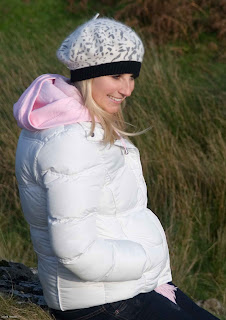 I don’t know how many of you watch Hollyoaks Later on E4, but Niall of the cast is heading for a fall. Well one of the joys of my work is occasionally you get ask to get involved with some really fun projects, and working with Lime Street pictures the production company behind the hit TV show hollyoaks, was one of those times.

My first day on the set I was expecting to see a host of Hollyoaks Later honey’s wearing very little. Unfortunately I was disappointed as not only were the ladies in short supply, but my hero of Hollyoaks Tony owner of Gnosh II wasn’t on the mini break to ‘Scotland’. I spent around a week spread out over a month in and around the set, involved behind the scenes either making sure a cameraman didn’t fall off a cliff, or helping to rig the set at the top of a cliff.

The week long special that Hollyoaks Later has been running which despite being sold as being set in Scotland was actually film just outside Rhydd Ddu, pretty much all within 400m of the station up the path leading to Snowdon the highest mountain in Wales. So whilst many of the cast and crew travelled from Chester, all I had to do is nip a valley over.

The cast and crew were great to hang around, and really down to earth. They were all as excited as I was to see the final stunt that we had all been so busy rigging. Even the actor who was actually going to take the fall was looking forward to it. I had a chat to him about it, and after he saw me rigging some scaffolding 20ft out over a 80ft drop.

I asked him how he was going to prepare for an 80ft fall, for there were not stuntmen to step in for him, in stead they were going to chuck the actor off the cliff on a piece of string, well a long piece of Kevlar/dyneema rope. Breaking him at the last possible moment. His answer was he was going to go when the director shouts ‘Action!’, or he hoped he was! I felt sorry for the cameraman that was going to have to following him off the top of the cliff top platform. 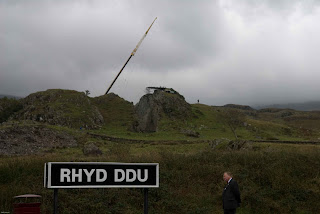 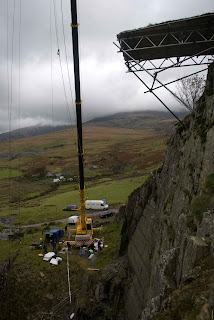